Varna, also known as The Sea Capital of Bulgaria or The Black Sea Pearl, is the second-largest city in Bulgaria with population of about 500 000 people. It is also one of the most ancient cities in Europe with an extremely rich history and heritage. The oldest gold treasure in the world was discovered near Varna.

Varna has its own newly renovated airport located around 8 km from the city centre. There are a number of flights which are available all year long but your best option is getting on one of the many charter flights organised by tour agencies in the summer.

Turkish Airlines now have a daily flight to and from Istanbul where you can get a connecting flight to pretty much everywhere in the world.

Another option is to fly to Sofia and take one of the daily flights of Bulgaria Air to Varna.

Another option is to just get a cab. Be very careful, however, and always check the price chart posted on the windshield or the side of the car. As mentioned in another post in this blog, there are some “rouge” taxis which charge double or triple the standard rate. A lot of them “hunt” around the airport and bus station as tourists are most likely to be misled.

By bus or train

Another very easy way to get to Varna is using either the bus or railroad system.

The latter will definitely take longer and we wouldn’t recommend it, especially in the summer, as most trains might be a bit too old school for some people.

Buses to Varna leave from pretty much every other city or town in Bulgaria. They are convenient and cheap.

If you are already somewhere along the Black Sea coast, like Sunny beach or Burgas, you can take a minibus (shuttle bus) and get to Varna in no time. Minibuses are operated by private companies. They normally leave from a separate bus station but they are a very common way of transportation in Bulgaria so it would be very easy to find more information on the internet or from the locals.

If you are going to use the busses, however, you might want to check some of the lessons on learn-bulgarian.net and learn some key phrases. You will often come across someone who speaks English but it’s always better to be prepared.

Alternatively, if there are no convenient flights straight to Varna you can always fly into Sofia or Bucharest – rent a car or take a bus and explore our beautiful country on the way.

There is no underground metro currently in Varna, but one is in the works. In the meantime, it’s convenient and easy to get around using above-ground transport. There are plenty of new and modern buses and trolley buses which are frequent and straight forward.

You can download the awesome app Info iTraffic Varna which lets you find the nearest bus stop and informs you when the next bus arrives. The app uses Google maps, so the street names are in English and it is simple to navigate.

You can purchase a ticket at the bus stop but don’t worry if you don’t get a chance to do so. Often a lady selling tickets will come to your seat once you get on the bus. The price is 1 lev. In some cases, in off peak hours, you’ll have to buy a ticket from the bus driver. Just look what the local people are doing and follow their lead.

The other option to get around is taxis, just as we mentioned above beware of the “rogue” ones. Here are the names of four of the main legitimate taxi companies you can use: Lasia, Omega, Hippo and TransTriumph. Generally, taxi services in Bulgaria are quite cheap in comparison to most European countries so this is always a good way to travel, especially in summer.

Because of Varna’s location at the seaside the city gets all four seasons but not to the extreme the other Bulgarian cities might have it. The summer is hot and humid as int he rest of Bulgaria but in Varna you get one saving grace – the sea breeze! An absolute life saver throughout July and August, it makes the evenings nice and cool and it provides a bit of a relief even on the hottest days.

Winters don’t get too cold either. Varna doesn’t get much snow. That same breeze that cools the summer makes it a little bit more chilly in the winter. But it’s nothing a good winter jacket can’t solve.

Springs and autumns are beautiful and convenient. Sometimes people can go to the beach all the way to late September.

And here we are – Varna’s biggest treasure. The beach! 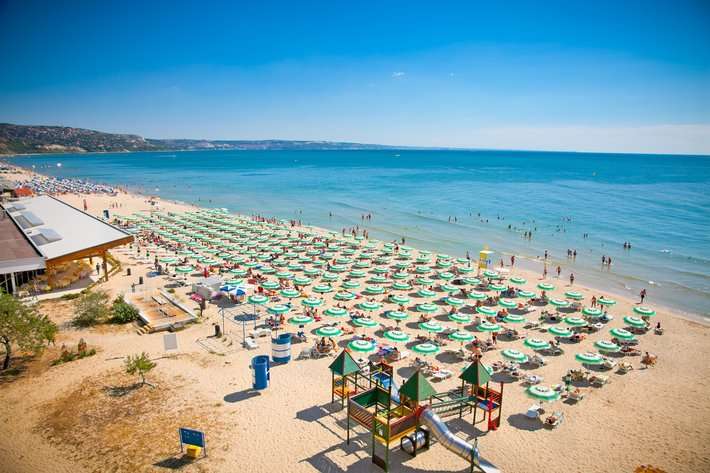 Most of Varna’s economy revolves around the city, being located on the sea coast. There’s the biggest port and the Naval Academy which provides education for different sea-related professions. There is lots of fishers  and fishes and, of course, tourists.

There’s nothing like a stroll down the beautiful board walk by the seaside with dozens of bars and restaurants offering of the daily catch, where you can relax with a pint of cold beer and enjoy the sea view.

Another advantage of the location is Varna’s proximity to some of Bulgaria’s biggest beach resorts – Golden Sands, Albena, St. Constantine and Helena are only 15-20 min drive away by car or public transport.

Like every other coastal city, Varna’s life is a bit different in summer than it is in winter. However, there are plenty of things to do and see any time of the year.

Varna’s biggest landmarks are the Cathedral “Dormition of the Mother of God” (“Sveto Uspenie Bogorodichno” in Bulgarian or just “Katedralata” as it is known by everyone), the Dolphinarium, the Sea Garden, the Roman Thermae, Pobiti kamani (The Stone Desert), Aladzha Monastery – the list goes on and on.

People from all ages can find fun activities in and around Varna. There are water parks in Albena and Golden Sands resorts, Pirate Boat cruises, carting, two big shopping malls, busy night life, water sports and plenty of beach bars for the young and old.

But even a simple evening walk down the main street, by the opera and the Cathedral, is an amazing experience – beautiful architecture, lots of little coffee shops and, of course, the gorgeous new water fountain.

Varnenets is the Bulgarian word for someone who comes from Varna. And although Varna is not the capital, varnentsi are proud to be called that.

Varna won twice the title “Best City to Live in Bulgaria”. The survey was based on several different criteria such as economy, healthcare, transport and connectivity, and was conducted by two of Bulgaria’s biggest media firms.

In 2012 “Traveler’s Digest” magazine ranked Bulgaria number 5 in the cities with most beautiful women in the world, along with Stockholm, Buenos Aires and New York.

With all the recent development and funding provided by the EU, Varna has become one of the most beautiful cities in Bulgaria. From its peaceful green Sea Garden to the bustling with life beach bars and big malls, visiting Varna should definitely be a must on everyone’s travelling list!