Should you travel by bus or railway when visiting Bulgarian towns? How about which taxi to take if you don’t want to be charged with the “special” price? What do you need to know about the parking challenges in the Bulgarian capital?

If you plan on visiting Bulgaria, transport is definitely something to consider. So, let me give you a few useful tips that will make your stay in Bulgaria more pleasant.

Getting to and from Sofia Airport

You will probably come to the country by plane. The Vrazhdebna airport in Sofia is at the outer ring of the city. There are two terminals. Most planes arrive at the newer Terminal 2, however, if you fly with a low cost airline you might arrive at Terminal 1.

At both terminals you have the option to take a bus to the city. The bus is number 84 (or 284) and you can find its stops in front of the airport buildings. The bus’ final destination is Eagle’s Bridge, which is right in the city centre. From there you have many transport options to your final destination. But more about the bus system later.

Since April this year, instead of a bus you can also take the subway (underground) to the city. The subway station will be on your left when you go out of terminal 2, right next to the building. If you want to get off right in the heart of the city, get off either at Serdika or Sofia University station.

There is no subway station at terminal 1. However, there is a free shuttle bus between the terminals that runs every 30 minutes between 7 am and 7 pm. Stop locations are indicated by a sign and pavement markings.

If you arrive at terminal 2 and you prefer to take a taxi, go out at the right-side door of the building, where you will find two taxi ranks for two of the biggest reputable taxi companies. They have regulated prices and won’t give you the “special” bill. I’ll tell you in more detail how to handle taxis in Sofia later.

Once in Sofia you might want to use the city transport network. For buses, trolleys and trams you need the same kind of ticket. It is different from the one needed for subway. The general one-time ticket can be purchased at most bus stops, in kiosks, Софийски транспорт booths or directly from the bus driver. I don’t recommend the latter option.

Once you’re on the bus, you have to punch the ticket in the devices mounted in the bus. Ticket inspectors may get on the bus randomly at any time. For more information about ticket types and prices, please click here. 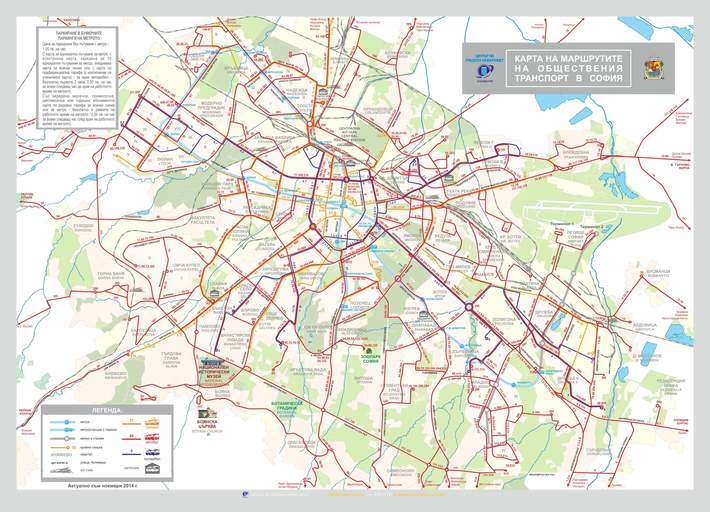 Shuttle buses are a common transport option in Sofia. They tend to be faster, but they are more difficult for a foreigner to use.

Each shuttle bus has a number indicating its route. If you don’t know which number you need, generally you can stop a shuttle and ask the driver. However, most of them don’t speak English.

To stop a shuttle simply wave your hand before the driver passes you. If you wait for a shuttle at a bus stop, you are expected to wait for it slightly ahead of the place dedicated for buses to stop.

Each shuttle drive is 1.50 leva which you are to give the driver once you enter. Be warned, riding in a shuttle is an experience not fit for everyone. There are often no places to sit and people tend to overfill the shuttles, especially during rush hour.

Shuttle drivers also have a time schedule based on the time the previous shuttle passed. That means most drivers are constantly on their mobile phones while driving and selling tickets to the passangers. It’s multitasking personified and yes, it is not legal in Sofia to talk on the phone while driving. But that doesn’t stop most of them. What makes people still use them? Well, as one of the drivers put it “20 minutes fear for your life and you’re home”. You have been warned.

Now, here comes the tricky part. Taxis in Sofia are generally very affordable. Unless you happen upon, what we call, a “rogue” one.  A “rogue” taxi is one that charges a lot more per kilometre.  They can get around the law by claiming to provide you with “luxury” services. Some, perhaps do, but there are quite a few that will just charge you 5 to 10 times more than a normal taxi would.

How to recognise the normal taxis? As a general rule of thumb make sure you check the taxi’s tariff, which is always displayed at the back door window. If the tariff is more than one lev per kilometre, just don’t take it.

The highest amount a rogue taxi charges spotted is 30 leva per kilometre. So, instead of paying a 10 leva bill to get to the centre, you would have to pay 300 if you are unfortunate enough to get one such taxi.

The rogue taxis also often make their logos look like the ones of the legitimate companies. So, my best advice is always check the tariffs at the door.  They cannot go around the law there, as they are obliged to state how much they charge per kilometre.

Recently, there’s also the option to use Uber Taxi in Sofia. Just download the iPhone or Android app on your mobile phone, enter the address where you’re going and the app will call you a Uber Taxi and tell you an approximation of the cost.

In rush hour, the subway is still the best way to travel in Sofia, if the still limited network works for your travel. It operates from 5 am to midnight and it costs 1 lev (0.5 euro). Tickets can be bought at the entrances, either from the ticket seller or electronic machine. Here is a map of the subway network.

If you want to visit another town in Bulgaria, your can either take a train or a bus. I strongly recommend you take the bus.

The Bulgarian train company has not really improved since the communist times, meaning no improvements has been done for decades. The train cars are old-fashioned and dirty; it is really not a nice experience. The prices, however are as high as the bus tickets.

What you generally get travelling by bus is more comfort. Especially if you travel with a bigger company. You can take a bus from the central bus station which is located right next to the central railway station. Tickets can be purchased there or online, however, the website is only in Bulgarian.

If you plan to travel to Varna or Burgas, you can also fly there from Sofia. For more information check the air.bg website.

Driving yourself in Bulgaria

If you are coming by car, all the advice I can give you is watch out, not all roads are in good condition.

You can also rent a car right at the airport. There are several companies who offer their services right in the hall of terminal 2.

If you are with a car in Sofia, take into consideration that parking in the centre is very difficult, and you have to pay for it. The good news is you can pay the parking fee by SMS.

There are two zones in the centre – blue for the very centre and green for the surrounding area. In the blue zone the parking cost is 2 leva per hour, in the green one – 1 lev. The zones are usually marked with a sign. To pay the fee by SMS, send your car number to 1302 for blue zone and 1303 for green zone. These rules are valid in work days from 8 am to 7 pm and for the blue zone also at weekends from 8am to 2pm. All the information about the zones is usually visible on a sign at the parking areas.

Always pay your parking. You don’t want to be searching for your car only to find the authorities have towed it away; the only way to retrieve it is to pay even higher “parking tax”.

So here you are – all the quirks and challenges of travelling in Bulgaria. I think knowing what to expect will help you enjoy your travel more. And there is indeed a lot to enjoy. Bulgaria is a beautiful colourful country with interesting people and I’m sure you’ll find the exploration worthwhile.