The Story Behind Bulgaria’s National Holiday 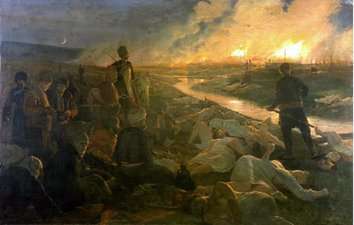 The slaughter at Batak by Antony Piotrovski

Before the Russo-Turkish war of 1877-1878 the Balkan peninsula was almost entirely part of the Ottoman empire. Bulgarians were under the Ottoman reign for nearly 500 years. But they never stopped wanting to be free.

The April rebellion of 1876 proved how desperately did the Bulgarians want freedom. The rebellion started on 20th April in Koprivshtitsa earlier than planned due to a leak of information. Once started, the rebels spread the news to the other regions. Todor Kableshkov, a noted Bulgarian rebel, sent to Panagyurishte the famous “Blood letter”, written with a dead Turk’s blood and informing the recipients that the revolution has started.

A lot of towns fought but the rebellion was crushed. And it was not only the rebelling men that were hanged and punished. In Batak, the Turkish army atrociously slaughtered the local women, children and old men who took refuge in the church and burned to the ground a lot of the rebelling villages.

From first sight it looked like the rebellion did not help in any way. But in fact, it was this desperate act that attracted the attention of Europe. The Bulgarian cause for political independence found supporters in the face of Victor Hugo, Lev Tolstoy and Fyodor Dostoyevsky. Russia was especially supportive of the Bulgarian cause, Britain – of the Ottoman empire. The great European political powers started shifting for or against the Ottoman empire. The majority’s decision was pronounced by the German chancellor Otto von Bismarck: “There is no place for Turkey in Europe”.

The war started. The Russians divided their army into 3 detachments – West, Ruschushki and Front. While the West detachment besieged Osman pasha and his men in Pleven, the Front detachment went South through Shipka pass. As a reaction, the Turkish sent Siuleiman pasha’s army to Shipka pass. Their goal was to help Osman pasha’s army. The Russian army did not have a strategic reserve for this move and as a result, the success of the war was entirely dependant on the battle at Shipka pass.

The Battle at Shipka 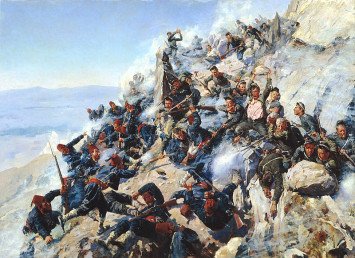 The Battle of Shipka

The battle at Shipka pass was one of the most epic battles in Bulgaria’s 1300-year history. The Front detachment, whose goal was to keep the pass included the whole Bulgarian army of volunteers. The famous Bulgarian author Ivan Vazov expertly retells what the army went through in an unequal fight against the ever coming Turkish hordes in his poem “The volunteers at Shipka”.

According to his account, the Bulgarian-Russian army was outnumbered. At a certain point the bullets were over, so they started using trees and stones, and eventually – their dead fellow man’s bodies.

This desperate fights kept the pass and the Russian army managed to advance almost until Tsarigrad. They were forced to accept a peace agreement because the British minister Benjamin Disraeli threatened to send UK army to help the Turkish. 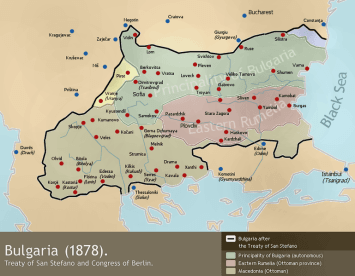 Treaty of San Stefano and Berlin

On 3rd of March, 1878 a peace treaty was signed in San Stefano between Russia and the Ottoman empire. The treaty created an autonomous tributary Bulgarian kingdom with christian government and the right to have an army. After 500 years Bulgaria was free again. However, not for long.

The neighbouring states as well as Great Britain and France were alarmed by this new player on the European stage. As a result, the San Stefano treaty was superseded by the Treaty of Berlin. Bulgaria was divided to Principality of Bulgaria, the autonomous province of Eastern Rumelia, and Macedonia, which was given back to the Ottomans.

Even though it took Bulgaria a few more years to get back its provinces, the treaty of San Stefano is the historic moment in which Bulgaria was proclaimed a free autonomous country. And this is what Bulgarians celebrate – the freedom they have and the lives of the brave men who made this freedom possible.