In Bulgarian folklore Samodiva (самодива, plural: самодиви) is an ethereal female wood nymph. She is unearthly beautiful and eternally young. Her hair is blond and long, her waist is thin and petite, her eyes can bewitch and dazzle or even kill. Any man who lays eyes on her instantly falls in love. A woman who sees a samodiva can go as far as killing herself because she cannot take so much beauty.

Samodivas’ attire consists of long white gowns and shirts and a rainbow-coloured or green belt. They have a white mantel, also called a shadow, in which their power lies. They like to ride deer, using twisted snakes for reins and often carry with them bows and arrows. If a huntsman accidentally kills a samodiva’s deer, she will make him blind or give him a disease which will inevitably lead to his death.

The wood nymphs live in dark forests, in big old trees, caves or forgotten huts which are near water sources, wells or rivers. Samodivas can be spotted from spring to autumn. In winter they live in the mythical village Zmeykovo, which is located at the edge of the world and is a home to many mythical creatures. When they are on earth they are active at night and disappear immediately when the sun comes out, because they fear it. 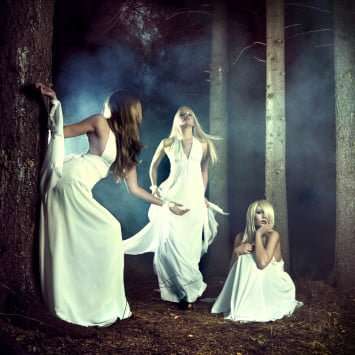 At twilight, the samodivas go to fresh water sources, strip naked, wash themselves and their clothes which they lay out to dry in the moonlight. They keep a watchful eye on their drying clothes, because if a man steals their mantle, where their power lies, they turn into normal women and have to obey the man. If this happens, they can marry and bear children, but they can never be good mothers or housewives and will always crave their freedom.

After washing themselves and their clothes, the samodivas gather around and start singing and dancing. It is known that the samodiva’s songs are the most beautiful and their dances are the most graceful. If a late traveller sees the samodivas’ dance, he is enticed to join them and dances with them from midnight to dawn. When the sun’s rays appear, the nymphs disappear in haste and leave the traveller to die from exhaustion. The samodivas love music and often kidnap shepherds, so that they can play kaval (кавал, shepherd’s pipe) for them while they dance.

Some say that samodivas are children of lamia (dragon-like creature). Others say they are wicked women who died and are stuck in between heaven and hell or that they are maidens who died before they knew a man. Even though they are heathen creatures, they observe the Christian holidays, especially Easter. They punish everyone who does not keep the holidays with blindness or death.

Samodivas are not always harmful. Sometimes they appear like normal working women and help with the harvest. They would especially help women with children. If a man does something good for a samodiva, she becomes his patron or a sworn sister. Sometimes, a samodiva can fall in love with a human and bear him children, who grow up to be great heroes.

Samodivas are forest creatures and therefore knowledgeable about herbs and cures. However, they never share their secrets willingly. The only way to obtain their knowledge is to eavesdrop on one of their gatherings.

The earliest records of the belief that samodivas exist are from the 13th century. It is considered that the belief is based on Thracian legend. Until this day there are a lot of Bulgarian folklore tales and poems devoted to these elusive beauties.