The Christmas time in Bulgaria is the time most full of traditions and rituals. Some of the typical Bulgarian rituals are very ancient and are not practiced nowadays. Also in the last decades some western traditions came into the Bulgarian culture. But generally, the Bulgarian Christmas looks like that: 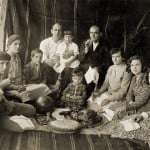 Christmas or Koleda started a lot earlier for the old Bulgarians. The Christmas fast was 40 days long and ended at 24th of December. Until the beginning of the 20th century this was a very strong tradition and every respectable Bulgarian was fasting the whole 40 days. There could be exception only for the children, pregnant women and old people (who could eat diary products).

On the picture above: how a Christmas celebration looked. Imagine it like that, just with some more dishes on the “table”. Source of the picture is the very interesting website http://www.lostbulgaria.com.

During the fast, it is not allowed to eat anything that comes from animals: meat, cheese, eggs, milk, butter, etc. An Exception is 6th of December, St. Nikola’s day when by tradition the whole family eats fish.

24th of December is called “Small Christmas” (Malka Koleda) or “Future Day” (Buhdni Vecher). At this day, the Christmas pig is killed, and the man of the family produces a big pear log (Buhdnik) which has to burn until Christmas day. It is believed that the pear log will protect the family from demoniacal creatures, which wander around at that time of the year. The ashes of the log are kept during the whole year.

The food at Small Christmas is meatless. Also, it is important that the number of dishes on the table are seven or nine. There are different symbolics connected with the number of dishes. Generally, seven is chosen because it is the perfect number of God, and nine symbolizes the months of pregnancy. In any case, the following dishes must be on the table:

Another thing that has to be prepared for Christmas is some small pretzels. They are needed for the Koledars.

The Koledars are young men who go from door to door and sing songs for health and prosperity for the house. They start at midnight, and go around all the houses in the village. When they visit a home, they sing for every of the inhabitants, then for fruitfulness. They take the pretzels, sing some more ritual songs and proceed to the next house. Here’s how they look like:

The day before Christmas in Bulgaria has more traditions and rituals than the actual Christmas day. On 25th of December, the feast pig is being cooked. All the foods that were not allowed during the fast days are now prepared. Banitsa with cheese, poultry, the feast pig, sweets, etc.

Nowadays, Bulgarians do not keep all the old traditions. However, the number and variety of dishes for Small Christmas is kept by most.

In older days the exchange of gifts was not a tradition, but it now is. All present are distributed at 25th December’s morning.

The western myth of Santa Claus (Diado Koleda) is widely spread among Bulgarian children. The advent calendars can be found in any shop, however, it is not a tradition to have one. 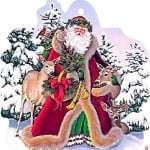 It is, perhaps, interesting how the Santa Claus myth started in Bulgaria. During communist time, when Bulgaria did not have much contact with non-socialistic countries, the belief of Diado Mraz or literally “Grandpha Frost” came from Russia. It was an equivalent of Santa Claus, just with a long red coat that reached his ankles instead a short red jacket. Later on, when Bulgaria stopped being a communistic country, the Santa’s name and coat changed a bit.

The Christmas tree tradition came in the Beginning of the 20th century. Nowadays all Bulgarians have a decorated tree at home during the Christmas times, which usually stays until New Year’s eve or beyond.

For God so loved the world that he gave his one and only Son, that whoever believes in him shall not perish but have eternal life (John 3:16)

The Learn-Bulgarian.net team wishes you a Very Merry Christmas and a Wonderful New Year! Cheers!