Recently I found an interesting old advertisement of Bulgarian chocolate. It is from the blog Stara Sofia, which is devoted to the history of the Bulgarian capital, specifically after the liberation and before the communist regime. Here is the history nugget for today:

Here is what the advertisement says: 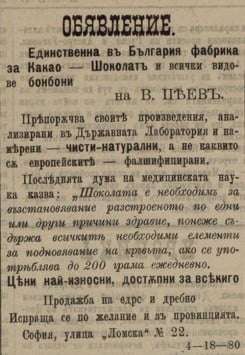 The only factory in Bulgaria for cocoa, chocolate and all kinds of candies

Recommends its produce, by the Governmental Laboratory and found – pure – natural and unlike the falsified European ones. The latest medical science states: “The chocolate is required for recovery of the health which is upset by one reason or another, because it contains all needed elements for renewing of the blood, if up to 200 grams are used daily.”

Prices are most advantageous, available for everyone.

Selling in big and small quantities. If desired it can be sent to the countryside too.

Isn’t that an amusing advertisement? According to the science from 1904 you can eat up to 200 grams of chocolate a day and it will only benefit your health. But this, of course, is only for the good Bulgarian chocolates, not the false European ones.

This peculiar ad inspired me to learn more about the time period and the chocolate. And I decided to share it with you.

Chocolate making was Velizar Pehev’s chosen trade after being an officer in the Bulgarian army. After a confrontation with King Ferdinand he lost his job. Even though he thought the European chocolates “fake”, Velizar learned to be a chocolatier in France, where he worked for a year in a chocolate factory. He was careful to learn and had the habit of taking notes all the time, which made his coworkers suspicious. They thought he was a spy for another factory and reported him to the boss. Pehev explained that he wants to introduce chocolate in Bulgaria and his honesty put him in his mates’ good graces. When he returned, he took with him some of his coworkers, who helped him establish his business. But more about him later, let’s get back to chocolate.

At the beginning of the 20th century, chocolate was a novelty in Bulgaria. It was considered a luxury and a lot of spiritual leaders at the time were declaring it to be “disgusting” and “food of the Devil”. The people who were brave enough to try this temptation often had to ask the chocolate maker “How do I eat this, with the shiny paper or not?”.

In the book My home town Sofia, Rayna Kostentseva shares her childhood memories. One of them is the reaction of her family when her godmother gave her chocolate for the first time:

“What can this wonder be!” I was thinking and everyone around me kept guessing. I unfolded carefully one of the blocks, trying not to tear the picture on it.
“Ha! Black” I cried, extremely surprised.
“Little soaps” added my mother.
I decided to lick one to make sure they really were soaps. When my tongue touched the block, I felt bittersweet taste.
“This is for food, mama!” I called as if I have discovered America.
“It cannot be!” my mother protested. “Don’t eat, wait until I try it first so you don’t poison yourself.”
When she tried the “soap”, she immediately threw it and went to wash her mouth.
“This is cat’s poo, get it out of here!”
When my godmother first ate one of these black “soaps” and explained what they were, I started eating them devouringly. After this case, my mother never tried chocolate in her life again. 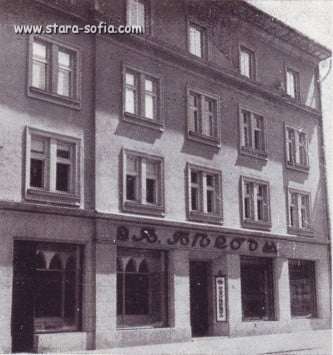 So, when Pehev was starting his business, it was a risky and difficult venture. Despite the mistrust of banks, lack of market, competition from imported products and problems with deliveries, Bulgarians liked the chocolate and Pehev’s business flourished. Velizar became the main producer of chocolate in Bulgaria, making 2/3 of all cocoa products in Bulgaria. In the 30s, the chocolate made by Pehev took the first place in the international fairs in Bern, Paris and Vienna.

Pehev expanded his production and opened a modern-day factory in Svoge in 1922. After Velizar’s death in 1927, his son took over the business. The communist regime forcefully took over all private businesses and the factory in Svoge was no exception. The government renamed the factory “Republica” and continued production of sugary foods. If you go to Bulgaria today, you can try the Republica (Република) bars which are still sold in every store.

After the communism, Kraft Foods bought the factory and started producing chocolate Svoge (Своге). Their famous advertisement with the catchphrase “Bulgarian (chocolate), from Svoge” implied quality Bulgarian chocolate. It is, however, made with a Swiss recipe, so the old tradition of over-patriotic company’s advertisements continues.

Despite the foreign recipe Svoge is considered a very Bulgarian chocolate and I advise you to try it on your next visit. If you have a sweet tooth try also Suha pasta Balkan (суха паста Балкан) which at a certain point was also produced in Pehev’s factory.