Iordanovden is celebrated in Bulgaria on 6th of January. It is a name day of the people who are called Iordan or something similar like Dancho, Danka, Bogoliub, Bozhan, Dana, Bistra, Boyan, Bogdan, etc. At that day Bulgarians celebrate the baptism of Jesus when he went to John the Baptist. The Bulgarian equivalent of the name of John is Iordan, thus the name day. 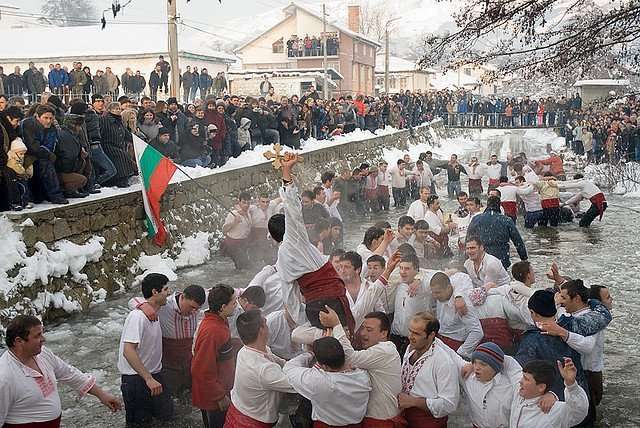 Iordanovden is also called Bogoiavlenie, which means “God appearance” because during the baptism of Jesus a voice of Heaven proclaimed “This is my Son, whom I love; with him I am well pleased.”

Bulgarians believe that at Iordanovden’s eve the heavens open and whatever you wish will come true. At this day, after the church service, the priest throws a cross into the water of the nearby river. The young bachelors jump into the water to take it out. It is believed that whoever finds the cross first will be healthy and happy. He goes around the village and everyone greets him. It is also believed that if the cross is found in ice, the year will be fruitful. After the cross is found, a horo dance is performed in the river and a celebration is held.

Nowadays, the tradition is performed mostly in the smaller communities. In the bigger cities it is common to visit the people bearing the day’s name and to celebrate. It is appropriate to greet everyone of your acquaintance who has a name day.