Day of Bulgarian Education and Culture, and Slavonic Literature 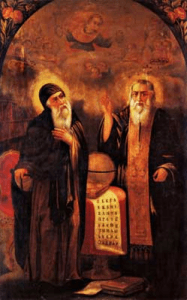 May 24 is the Bulgarian education and culture, and Slavonic literature day. It is also known as the day of St. Cyril and Methodius, in honor of the brothers who created the Cyrillic alphabet. It is a public holiday in Bulgaria, celebrated with an abundance of cultural events.

Cyril and Methodius were canonized as saints for their extensive work for the christianizing of the Slavs and the creation of the first Slavic alphabet. They are also known as “Apostles of the Slavs”.

In a nutshell, Cyril and Methodius were born in Thessaloniki in the 9th century. With the help of their uncle, Cyril received his education in the university of Mganaura (the most prestigious school in the Byzantine empire, where the children of the aristocracy got their education) and Methodius received a job as a manager of an area near Thessaloniki.

Cyril’s education and his ability to speak both Arabic and Hebrew made him appropriate for several missions in the Middle East. Then in 862 the prince of Moravia requested from the Byzantine emperor to send missionaries to evangelize his Slavic subjects. Cyril and Methodius were sent for this mission. During their mission they developed the Glagolitic alphabet, with the tasks of translating the Bible in Slavonic. The Glagolitic is the first alphabet used for the Slavonic language.

After the death of his brother, Methodius continued his work among the Slavs with the help of his disciples. However, the new Pope forbade the use of Slavonic for liturgy in the Church and Methodius found himself in an uncomfortable position; he had to flee to the First Bulgarian Empire.

The Glagolitics was based on the Greek letters and was difficult for daily use. St. Clement of Ohrid, a disciple of Cyril and Methodius, simplified the Glagolitic and thus the Cyrillic alphabet was born.

In memory of Cyril and Methodius, the national library of Bulgaria in Sofia bears their names. A statue of the two brothers is situated in front of the library in their honor. Also, the first modern Bulgarian university, the University of Sofia, bears the name of St. Clement of Ohrid.