The day of St. George is celebrated in Bulgaria annually on 6th of May. It is an official state holiday, as well as “Day of bravery and the Bulgarian army”, “Day of the shepherd”, a church holiday and a name day for the people sharing the saint’s name.

Gergiovden is the most celebrated name day in Bulgaria, with 180 000 people bearing the saint’s name or a derivative of it.

In the Bulgarian cultural calendar Gergiovden is one of the biggest holidays. It is connected with a lot of rituals for obtaining health and fruitfulness for the people, animals and fields. 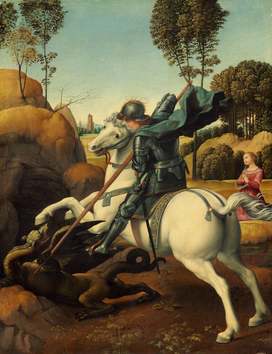 St. George and the Dragon

In the early morning of Gergiovden, before the roosters awake, people go outside in a field or meadow and “bath” in the morning dew. It is believed that in this time of year the morning dew is “blessed” and whoever baths in it will be healthy. The morning dew will also cure disease and if a bare woman baths in it she will become fruitful. Except in the dew, bathing in natural springs on this day is also beneficial.

Another ritual related to the morning bathing in dew or spring water is gathering and taking the water home. It is believed that this water has great healing power.

On the way back from the bathing, people gather fresh green plants, which they use to decorate the doors of their houses, stalls and pens, themselves and even their cattle. Herbs are also gathered that morning because it is believed that they have a very potent curing power on Gergiovden, much like in Eniovden.

To aid the fruitfulness of the fields, the land owners take the first coloured red egg from Easter and walk with it around the field, finally burying it in the middle. They do likewise in the pens and stalls.

The most important ritual on Gergiovden is, without a doubt, the sacrificial lamb. If a family doesn’t slaughter a lamb on that day they are considered out of the faith and out of the community.

Depending on the region, the lamb is either slaughtered in the house, making sure the blood is sprinkled on the walls or slaughtered under the trees or near a river. The lamb’s blood is also spread on doors and corners of the rooms and even the children’s faces, so that they will be healthy during the year.

Usually, the lamb is roasted whole, and after cooking it is brought to the church to be sanctified.

In small villages, the feast is usually for the whole community. It is done on a green filed near a church. After sanctifying the field people bring the cooked lambs, ritual breads made with the dew water gathered at morning, fresh milk, cheese, yogurt, fresh garlic and so on.

The feast must be joyful. People dance together the traditional Bulgarian horo at religious songs which tell the story of St. George and the dragon.

Nowadays, of course, people don’t keep all of the traditions connected with Gergiovden. Having some lamb (bought at the supermarket and home cooked) and a feast (with family and friends) is how people celebrate in the modern age. And that is the core of the holiday.

Oh, and don’t forget to call and greet all the Georgis and Gerganas you know.