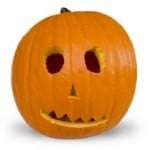 The following short story is written by one of the most famous Bulgarian authors – Elin Pelin. His stories are both touching and funny and his style is generally very amusing.

The original text of the story can be found here.

When Goody Goodfellow, filing clerk in the local government, once went to the house of the director to bring some documents for signing he found him eating with his wife and children a pumpkin, baked whole into the oven.

When the director signed the documents he cut a small piece of the pumpkin and politely offered it to his clerk:

– Here you are, mister Goody, so you see what a wonderful pumpkin! It is just a bit over baked, but it is good. You will excuse us. – Oh, thank you, thank you, mister director! Said the clerk with embarrassment – I, uh… don’t like pumpkin. How so? You are from the countryside, how come you don’t like pumpkin!

Goody was feeling unpleasant when he was reminded, voluntarily or not, that he is from the countryside. He reddened because of his shame.

– Yes but, my stomach, you know, mister director, has fallen out of habit from such things – he answered, as he was nodding head and frowning face.

In spite of himself, his eyes flickered over the sugar-coated slice of pumpkin with reddened and temptingly baked core and saliva gathered in his throat. He didn’t dare to swallow from fear that they will understand his weakness.

– Come on, take, don’t be shy! – the director was politely inviting him – I haven’t put pumpkin into my mouth for so many years and still my stomach accepts it! – I cannot, mister director, it is unpleasant for my stomach, I can’t even taste it! – said Goody and thought: Look, what a fool I am, I should have taken!

And so as not to stand before the temptation, he bowed humbly, said “goodbye”, and walked away.

When he found himself on the street, he freely swallowed his saliva and reproached himself again.

And Goody hit his head with a finger disapprovingly. The delicious piece of pumpkin appeared again in front of his eyes – nice, warm, sweet and with slim tempting steam soaring over it.

– Actually, if there is something I love most in the world, it is baked pumpkin – he started speculating, as he was walking on the street with his head bent down. – I eat them like a pig. But only if their bloody name was not so! Pumpkin! Sounds somehow vulgar, damn it! Silly, rustic thing! It will be said: this one eats pumpkin – get him out – a person without culture, a simpleton, to sum it out – a pig. Some day I will go to the countryside, and I will eat only pumpkins! Far away from people!

And his imagination started putting in front of him only pumpkins – sweet, nice and aromatic.

From this day on, Goody Goodfellow became restless and nervous. The ghost of the baked pumpkin started haunting him.

He sits in the office to work but the thought keeps gnawing him. He writes something, writes to be done for. But it seems to him that the quill, which scratches speedily on the book is whispering to him: pumpkin, pumpkin, pumpkin…

If he argues with someone of his mates in the office, he will immediately call him either “baked pumpkin” or “what are you reddening like a baked pumpkin”” or “look at you, what a drunkard you are – steam is soaring from your head like from a baked pumpkin!”.

At night, when he falls asleep, the tormenting ghost of the pumpkin comes again. In a dream he sees a field, but not just a field! Long, wide, the end of it is out of sight! And those baked pumpkins have rolled on the field and over each of them sweet steam is soaring! Goody walks trough that field, looks at the pumpkins and wants to take, but when he bends down, the pumpkin disappears. He walks again. On a field, but not a field – some sort of office, more or less wide! There somewhere a huge pumpkin appears and starts rolling towards him and grows, grows, becomes as big as house, as church, as mountain, bigger and it starts to roll faster and faster towards him. Goody is scared and runs, and runs, his feet grow shorter and shorter. The monster pumpkin catches him and throws itself on him.

The clerk trembles and wakes up, wet from sweat.

This dream starts tormenting him every night.

One evening the clerks from the governmental office had a feast.

They baked giuvetch** in Muddy the restaurant keeper and gathered to have some fun. They had made the dish spicy in order to drink more wine. There, of course, the clerk was invited too.

Eventually mister Goody got up, put himself on a chair, cleared his throat and raised his cup with inspiration.

But between those effusions, in his mind unceremoniously appeared that awful baked pumpkin, which was following him all the time and in his head was mixing the files of ideas, gathered in fourteen years of service.

Goody made an effort to go on. He made a strong gesture with a hand and as he stretched it towards the low ceiling, held it up for several minutes officially, with eyes set on his mates in an inspired manner.

– At equal speed, to put it that way… partly… more or less…

But the pumpkin rolled again in the river of his thoughts. Goody felt absolutely weak. He relaxed his hand, turned towards his mates and started speaking with a soft, full of emotion and gentle voice, far away from the orator’s pathos.

– You know what, gentleman, let’s bake a pumpkin some day! Just like that – as mates. It doesn’t cost God knows how much! And we can have some fun again.

For short there was silence. Then all cried “Horay” and Muddy’s restaurant burst with applause.

And within five minutes they made a list, gathered some money, bought a pumpkin and sent it to the bakery. Goody sinked into happy thoughts.

After around an hour when the pumpkin was ready he wished to bring it himself and went.

Just when he was going back with the tray on which the baked pumpkin was carrying aroma around, in the darkness he was met by the director.

– A-a, mister Goody! – he addressed him. – But you baked a pumpkin!… I am glad, I am! As it seems your stomach is already well!

Goody swallowed his tongue and couldn’t say anything.

When he brought in the pumpkin to his mates, they all noticed that he was pale as a dead man.

– What’s wrong with you? – they asked in astonishment. – I don’t feel so well! – answered Goody and then relaxed feebly on a chair in the corner and stayed there dark and numb. Lost in some dark thoughts he even didn’t look at his mates, which were eating the sweet pumpkin with zest and joy. – Goody, take brother – they invited him. – I want not to eat – he answered sad and sorrowful and added whiningly – I don’t feel well, I feel very sick, boys!… It’s the end of the world…—

* A Bulgarian saying ** A traditional dish made of baked vegetables

The original names of the heroes in the story are changed. They are translated according to their meaning: