In Bulgaria, the first day of March is a national holiday. On this day Bulgarians share martenitsi as a symbol of sympathy and friendship, wishes of health and luck. The martenitsi are small ornaments made of thread which are always in red and white colors. The shape of the martenitsi can be different. It is often in the form of two people – a boy and a girl called Pizho and Penda. But the most comfortable shape is that of a red and white bracelet. 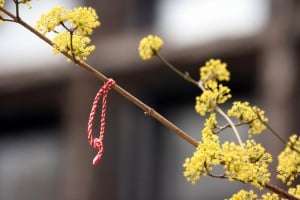 The holiday originates from pagan times when the Bulgarian tribes were worshiping Mars – the god of spring and war. In this sense, the symbolics of the two colors is the following: red is the color of blood which should not be spilled by wars and white is the face color of the women who are worried for their man when they go to war. The martenitsi are given as an amulet for mild spring weather that is kinder to the warriors.

However, there is also a more romantic explanation of the origin of this holiday.

The Legend of Khan Isperih

A long, long time ago khan Isperih left the Tibet mountains which were his home and started searching for a fruitful land for his people, the Bulgars. He passed trough a lot of places until finally, he reached the Slavic lands where he felt welcome. Slavic women in white clothes were serving him drinks and fruits of this blessed land. However the khan felt sad. He was missing his mother and his sister Khalina. He sat at the big river bank and great teardrops fell from his manly cheeks. His eyes rose upwards towards the gods in prayer. Then a miracle happened. A fast-winged swallow landed on his shoulder. Isperih shared his pain with the swallow and it flew to the lands where the Bulgars were. The swallow told Khalina with a human voice that her brother has a new kingdom and he is missing her.

Khalina was happy to hear from her brother and decided to send him a message. She made a small bouquet and tied it with a white wool thread with nods which were a greeting by the old Bulgars’ tradition. She sent the bouquet by the swallow. The bird flew as fast as a lightning and soon landed on Isperih’s shoulder. But from the long way the bird’s wing was slightly hurt and blood painted the white wool thread. The khan happily took the bouquet and read his sister’s greeting. He put the bouquet on his chest and the martenitsa started to shine. Then Isperih told his people each of them to tie a bouquet with white and red thread and on this day to wear it on his chest – for health and divine blessing. This happened on 1st of March and is still celebrated. 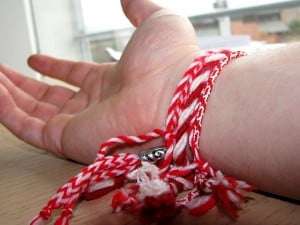 There are other legends connected with the holiday. Baba Martha is a personification of the month March. The word “Baba” means “grandmother”. Baba Martha is a women and therefor her moods change often. When her mood is good, the sun shines and the spring weather is lovely. When Martha’s mood changes to bad, the cold winter comes back. Bulgarians often greet each other on 1st of march with the phrase “Chestita Baba Martha” or “Happy Baba Martha”.

There is an interesting tradition connected with Martha. Women choose one day in the month. They say, that whatever is the weather on the chosen day, such will be your character trough the whole year. So, ladies, be careful what you choose!

Chestita Baba Martha to all!